Impact of real world test conditions on the accuracy of PEMS

As on-board measurements are part of the new Real Drive Emissions (RDE) emission regulation, accurate measurements of the PEMS are essential. Until now, the PEMS devices only had to be compared with the lab instruments in a stationary state conditions, where the PEMS results have to be within defined tolerances to the laboratory devices.

To identify whether the PEMS measure correctly when they are exposed to accelerations, pressure- and temperature variations occurring when driving on real roads, we designed the PET (Portable Emission Accuracy Test bench). The PET enables to expose PEMS to accelerations in two directions during exhaust measurements on the chassis dynamometer. The modal data of the shaking PEMS can be compared with the stationary laboratory analysers. In a first application, three PEMS systems were measured on the PET during tests on HDVs on the chassis dynamometer of TU Graz. In this set-up an FTIR was used as lab instrument for gaseous pollutants (CO2, CO, NO, NO2) with diluted or undiluted sampling. For PN a PMP compliant dilution system with a CPC d50>23nm was applied. By switching the PET movements on and off, impacts of movements of the PEMS on the agreement between lab analysers and PEMS analysers can be identified.

In the first tests the motion profile of the PET consists of several sinusoidal cycles with different amplitudes and frequencies to simulate actual accelerations measured during RDE on-road measurements. In the next version of the controller software, direct import of measured movement trajectories shall be possible. The figure below shows the schematic PET measurement set up with diluted FTIR sampling. 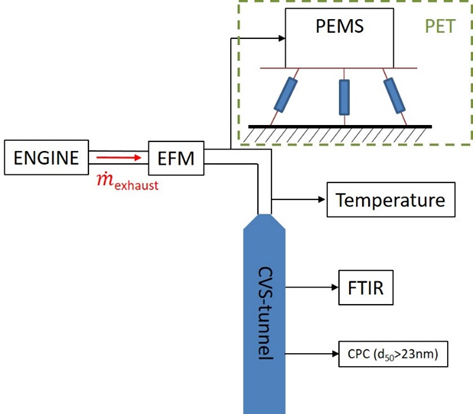 The figure below shows an excerpt of the result for NOx at a constant speed of 50 km/h, 1% gradient and a duration of 30 min on the HD chassis dynamometer. In the first 15 minutes the PEMS was at rest, the second 15 minutes it was shaken vertically. The blue line represents the result of the PEMS, the red line represents the FTIR analyser and the vertical green line shows the start of shaking. There is a clear difference in the NOx measurement values between PEMS and FTIR when the PET starts shaking. Further analysis of the influences and of options for a certification procedure for PEMS systems are ongoing. 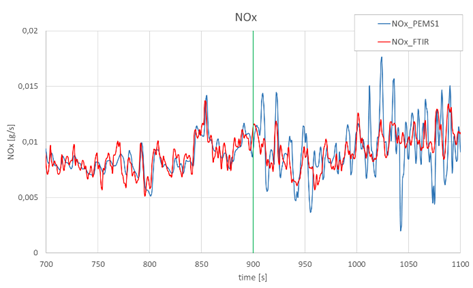 Example for NOx emissions from FTIR and PEMS (steady state and under motion after 900 sec.)