Update of the emission factors for road traffic

For the Handbook Emission Factors for road traffic (HBEFA 4.1) the data for cars, LCVs, HDVs and 2-wheelers was updated using all newly available test data. As for the HBEFA version 3.3, we simulated the emission factors (EFs) using our vehicle emission model PHEM, which is based on the simulation of engine power and engine speed from vehicle speed and road gradient trajectories using the equations of longitudinal dynamics. The corresponding emissions are interpolated from engine maps and are further corrected by transient functions and by models for catalyst efficiencies. Compared to the former version, several new boundary conditions had to be considered, leading to many novel approaches:

Due to the huge amount of data available (approx. 700 instantaneous vehicle tests), the calculation routines were largely automatized. All tests are stored in the ERMES data base which provides for each vehicle the input needed by PHEM. To be able to use PEMS data, which typically has no engine torque signal, we elaborated a new method to calculate the engine power from the engine speed and the CO2 mass flow based on calibrated CO2 maps per engine technology. With this method, PHEM calculates for each measured vehicle the engine emission maps for CO, CO2, NO, NO2, PN, Fuel flow etc..

From the normalised emission maps of the single vehicles, average maps per vehicle class are then compiled according to the registration numbers of each vehicle model in Europe (e.g. for EURO 6a,b diesel cars). Additional features to increase the simulation accuracy, such as the SCR model, were developed based on sub-samples of vehicles, which included the extended demand on measured data for these tasks. The novel SCR model also considers the limits of AdBlue dosing and the corresponding reduction of NOx conversion efficiency with reduced NH3 level in the catalyst. This effect is significant in longer low load cycles.

Before calculating the EFs, the relevant data for the average vehicles was calibrated to meet real world fuel consumption data according to engine type and EURO class. The most relevant input data for calibration are vehicle mass and loading, auxiliary power demand and additional rolling resistance and air resistance due to real world conditions not covered in type approval data (shares of roof boxes and trailers, side wind, wet road, low tire pressure, winter tires and HVAC operation in the total vehicle-mileage). The results meet the fuel consumption gained for NEDC, WLTP, RDE tests and for average real world driving of the German fleet from the spritmonitor data very well (e.g. Figure 1). 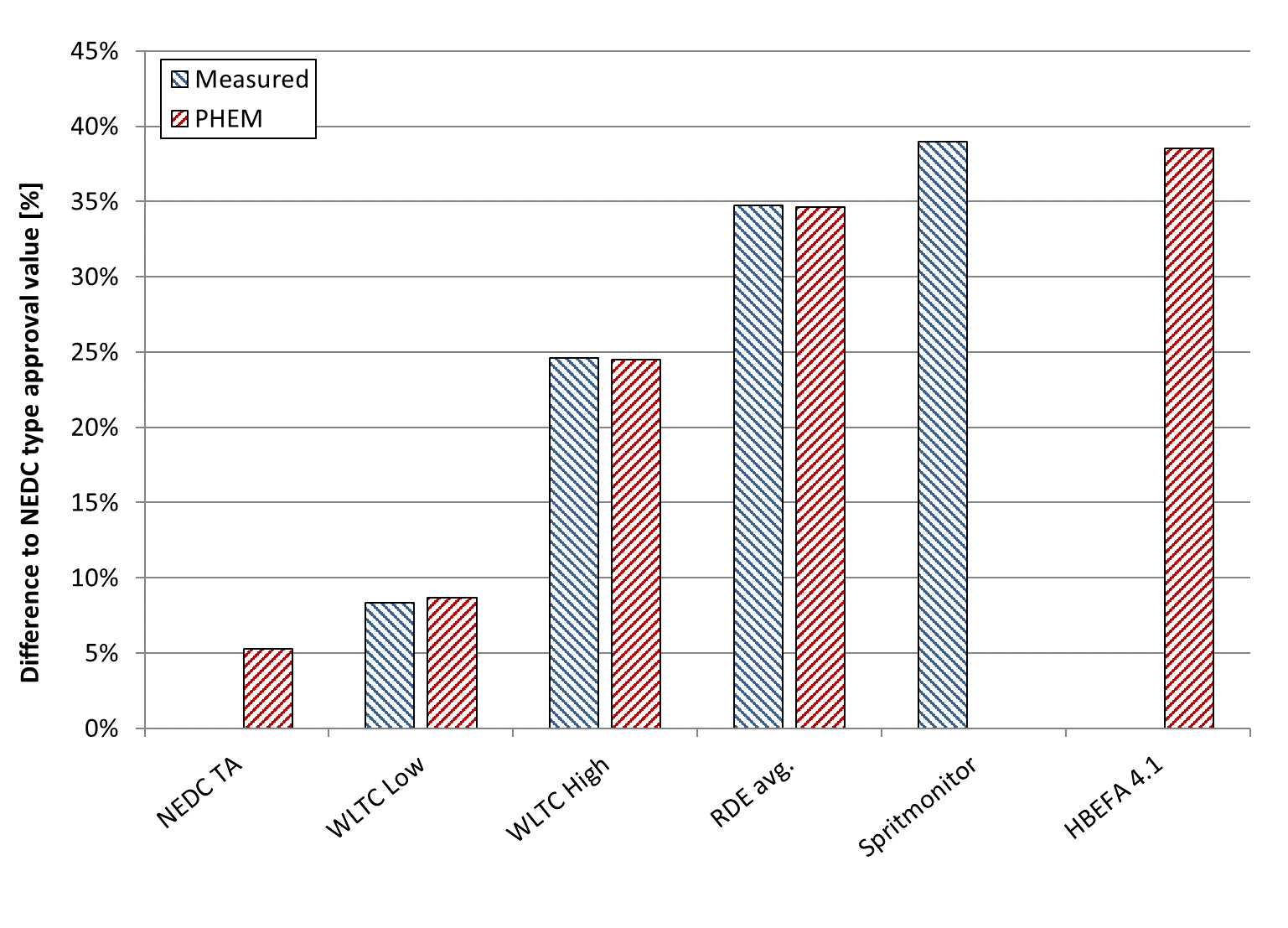 Simulated versus measured fleet CO2 values of modern gasoline cars with adjustment of vehicle properties to driving and test conditions.